Skip to content
So I\’ve been working on a project for the last couple of weeks and I wanted to share.   My new love is Pintrest and I\’m happy to say that I feel like I spend as much time working on projects that are inspired by Pintrest as much as I spend time on Pintrest…so its ok, right?  I might be a little bit addicted…Anyway, a recent blog I got to from there had ideas for a pantry revamp, including a family binder revamp.  AMAZING!!  I have yet to revamp the pantry (it’s in the works), but I loved some of the ideas for the family binder so I took some of what she suggested and made up a lot of my own…and it became this!!  My new Bills Binder: 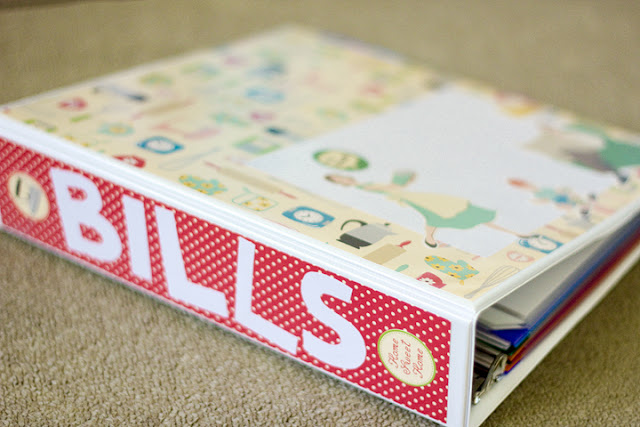 Something that she suggested was the dividers with pockets-super brilliant idea!!  I used to put my bills in a bin and sort through them twice a month or so.  Jon has never been involved in the bill paying and it’s something I\’ve wanted him to be involved in for a long time.  With this system, paying the bills could be done by Paisley!!  I made a tab for each bill that we have with a cover sheet with the logo and following information and due date.  This way ANYONE (which is a little scary) could log into any of our accounts for any of our bills and pay them.  This way when I forget which password is which, or I have customer service on the phone I can readily reference all my information quickly!  I also plan on keeping all the bill stubs for the year behind the tab for records and comparison (normally they go into an accordian file, but I hate filing them so sometimes it just ends up being an endless pile!!)  So ideally* the bill comes in the mail or e-mail, I place it in the tab folder, I sit down to pay bills once a week (or Jon or Paisley, lol) and I have EVERYTHING I could possibly need to sit down and pay everything.  I mark whats paid, place it behind the tab and continue on with my life!! 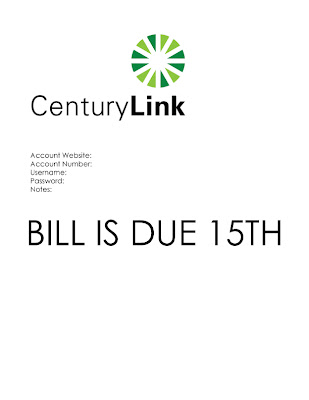 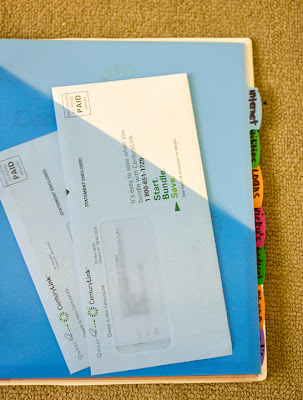 Another thing that I\’ve wanted is a clean cut which bills are due when.  I hate having all of that on my normal day to day calendar (it’s full) and if the two of us are going to be paying bills I really wanted a visual to show when, who and what has been paid.  I actually have an app on my phone and so does Jon that was supposed to help with this, but so far I really just like having things on paper.  So I put together this worksheet.  This way if something gets paid, or doesn’t we have a quick reference at the beginning of the binder.  I added EVERY bill that is a possiblility-some we don’t actually always have to pay (like my Victoria’s Secret card), but this way if I do have a balance I have a note to check and pay it on time. ﻿ 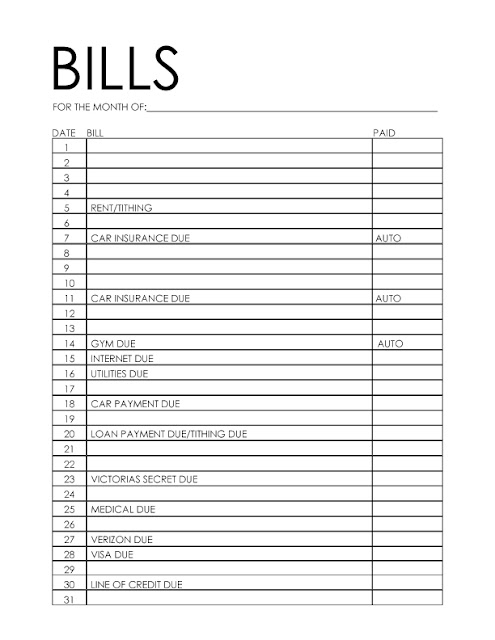 And lastly, the Budget worksheet.  This layout is stolen from One for the Money, but I split it into 2 groups because we get paid twice a month.  This way I have a general idea how much spending money I have versus bill amounts in the 2 pay periods.  I\’m debating on using the cash method for this…we tried it for a minute-it’s just super hard because I hate going to the bank!!  (we don’t have a drive thru on our side of town and I\’m SUPER lazy).  Ideally too I can watch these and add in the actual as we go to see how we’re really doing.  Once again, I have an awesome website that make pie charts and everything (mint.com) BUT it updates too slowly and I have to go categorize EVERYTHING that we spend if we want it to work properly.  ug.  So I\’m hoping with this revamp that Jon and I can be on the same page, and that we can be more organized and aware when it comes to bills and budgeting!! 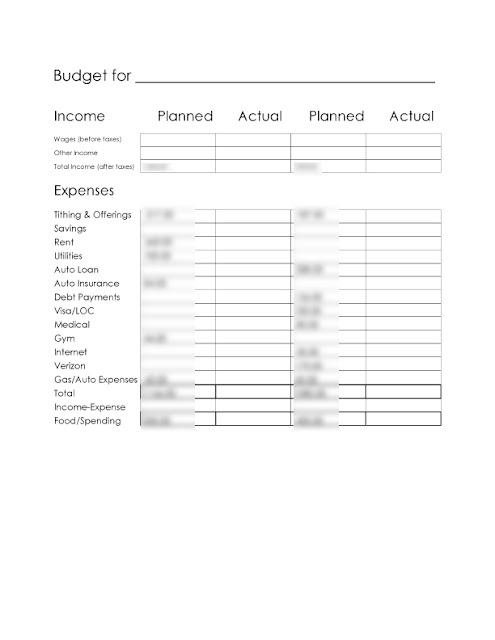 I share because I hope this works!!  Jon and I have struggled our entire marriage with bills, budgeting and staying organized and I hope so much that this helps us get on the same page!!  I really want him to be involved-to help relieve some stress and so he can see more clearly where his hard earned money is going!!  What things have worked for you in your budgeting???﻿
﻿