I have to record this entire story because it still makes my head spin a little when I think about it.

At the height of my misery with hyperemesis gravidarum my midwife and I decided that a PICC line would be the best thing for my care (I escalated care from Cyndi Johnson back to Katie Gubler because she has a few more resources available working in an OB’s office.  I\’m currently doing share-care between the two and I couldn’t be more blessed).  I saw her on a Thursday (side story: I had to wait for IV therapy and slept like the dead for 3 solid hours on a couch at the main entrance of the old hospital here.  I was that person.  I still remember the nurse nudging me awake and asking Are you April Davis?  Are you ok??), I had my PICC line placed Friday morning and Saturday I met my first home health nurse. 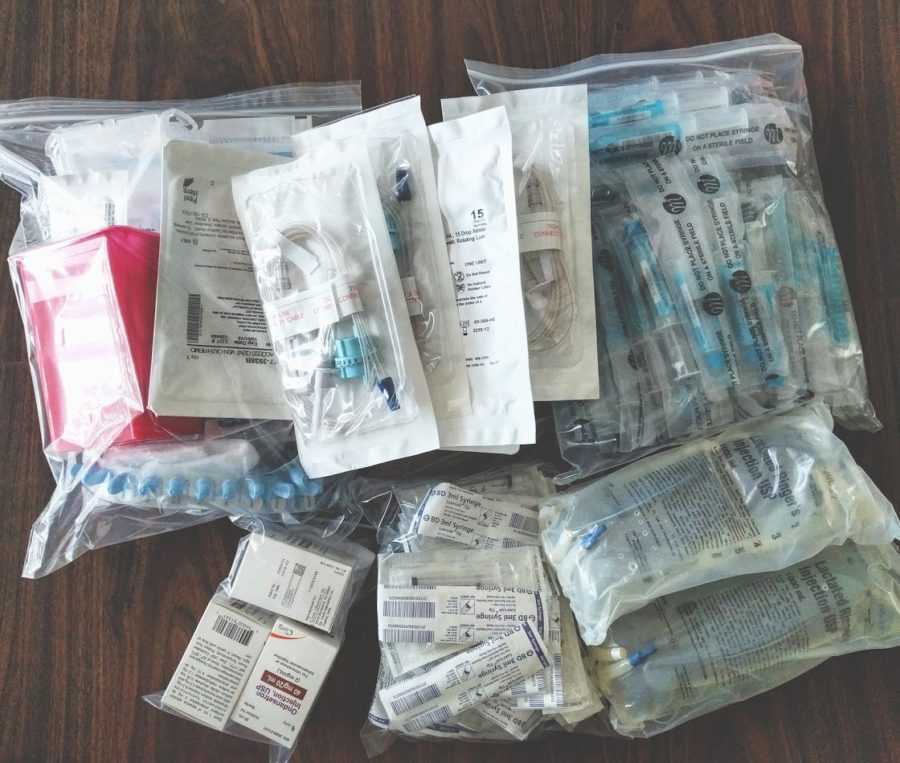 She seemed very nice and quickly sat down at my kitchen table to open up all of my supplies.  I had my own IV pole, boxes of saline syringes, alcohol wipes, heparin, IV zofran, IV fluids and the like.  While charting things on her laptop she began sorting through things and asking me questions.  Stella, my 4 year old stood next to me as I sat there.  At this point in my pregnancy I was still suffering from electrolyte imbalance, was incredibly weak, and just starting to get rehydrated so I was pretty out of it.

Is this your first pregnancy?  she asked.  I looked at Stella, who was still standing next to me.

Ummm, no?  I replied.  It’s my third. This is my daughter, Stella.  She continued to sort and chart, glancing at me periodically.  She asked me if I\’d been this sick with my others and I explained that I had, but that I had never needed to go as far as a PICC line.  Stella ran out of the room.

She then opened a sterile kit with scissors, tweezers and the like inside.  So we’re removing this today? she asked.  She looked at my chart again and then corrected herself. Wait, you had this placed yesterday??  So we’re just doing a dressing change?  I nodded.  She looked down at the sterile kit she just opened.  Hmmmm, we can probably just put this in a bag or something.  I stared at her, horrified and asked Isn’t that supposed to be sterile?  She nodded but explained we could just put it in a grocery bag for now.  I pointed her in the direction of my ziplocs instead. (And after calling the pharmacy to verify they sent a whole new kit because STERILE!!) 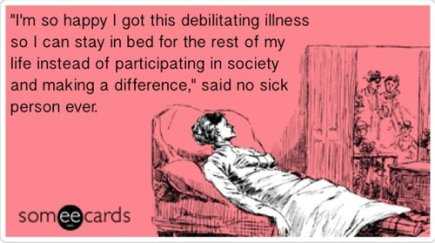 She pulled out a bag of IV fluid, opened up a package of tubing and promptly spiked through the bag, spraying IV fluid everywhere.  I wanted to cry.  She just wasted a bag of very precious fluid (that I had to pay for).  Stella returned by my side to see what was going on.

So is this your son? she asked.  I looked at Stella, confused.  No, this is my daughter Stella.  Stella ran back out of the room to go watch some TV.

She sat down at her laptop to focus on charting.  So this is your fourth pregnancy? she asked.  No, it’s my third I repeated.  She looked over her glasses at me, questioningly You haven’t had any losses??

No, I haven’t.  Just the the 3 pregnancies and 2 living children.  Gravida 3, Para 2 (medical term).  Stella came back into the room to stand next to me.

Oh, so is this your oldest then? she asked.  At this point I was beginning to wonder if I was somehow so out of it that I was hallucinating because there is no way a nurse with an RN actually made it through schooling and can’t keep my one child in her mind for more than 2 minutes and could possibly screw up that many things in such a short amount of time (I\’ll add a note too that Paisley wasn’t even home while any of this was happening, so literally no chance at confusion).

I *a little exasperated* said No, this is my same daughter, Stella.  My oldest isn’t here.  She proceeded to take my vitals and explain that they were really bad and I should probably do something about that.  She asked if I could try and be a little more active and eat a little healthier.  I think I just stared at her and tried to explain that I HAVE FREAKING HYPEREMESIS GRAVIDARUM.

She then went on to explain that her daughter is pregnant and has HG as well and it was just horrible for her. I nodded, we hooked up my IV and thankfully she finally left.

But it didn’t end there.

She returned the next day.  Not wanting to risk being killed by her, I hooked up my own IV in the morning before she came and had finished it before she got there.  I had laid down flat to run it in and turned my fluids all the way up to get it done with quickly, things I learned not to do as I went (things I actually knew not to do before BUT I was super sick and couldn’t think straight).  This left me with very wet lungs and a killer headache.

She had me lay on my couch while she checked my vitals and explained once again that they were very bad and I really should do something about that.  I told her my lungs were feeling really wet and she had a listen.

This has got to be pneumonia she explained.  That must be why your vitals are bad. (not the weeks of dehydration, vomiting, and being bedridden).  I shook my head because I couldn’t possibly have pneumonia, not right now.  I just really didn’t need another thing.  She continued on more about her daughter and how sick she currently was with her pregnancy.

Does she have a PICC line then too? I asked.  She looked at me like I was crazy.  No, she doesn’t need that.  She’s just been drinking ginger in warm milk and that’s what’s been helping her feel better.  The thought of GINGER IN WARM MILK made me gag a little.  Have you tried anything like that before? she asked me.  I nodded and explained that I was a little beyond holistic remedies.  She then asked my what my doctors name was.

Katie Gubler I replied.  She looked over her glasses at me again.  No, honey, I mean your Doctor.  What’s HIS name?  I stared at her.  Katie Gubler is my referring care provider I said.  No, I need a REAL doctor, what’s your REAL doctor’s name? What’s HIS name? she asked again.  Katie Gubler is who referred me.  She’s a Certified Nurse Midwife, working in an office with other physicians.  That’s who put me on home health.  She looked it up in her database and was shocked to see a female nurse-midwife listed as my doctor.

I\’m going to call over to their office and tell them I\’m worried you have pneumonia and we\’ll see what the DOCTOR wants to do from there she said.  I nodded, staring.  She just did not seem to be THAT OLD so what in the world was wrong with this woman??

She stood to leave and I sat up as she patted my arm.  Have you just tried nibbling on some saltines in the morning? she asked.

(Looking back I want to scream Seriously??!?!  You think I wanted to have a tube shoved up my arm to my heart instead of trying crackers??  You think your daughter has the same thing??  YOU\’RE A FREAKING NURSE?? (Thankfully many homehealth nurses treat hospice patients so they don’t mind being killed, but still)

Tears were behind my eyes at this point as I realized that if I stayed in this woman’s care she would indeed kill me, or I would kill her by the end of this.  I nodded and asked her to leave, completely shocked and beyond stressed that this was the care I was going to be receiving.  I promptly called Cyndi.

I need you to tell me I don’t have pneumonia I said as soon as she answered.  You don’t have pneumonia she replied.  I explained my vitals, my symptoms, and just how awesome this nurse had been.  She explained the bad vitals were due to my current condition, the wet lungs were because I knew better than to run an IV in at full bore laying flat, and my fever was because of the UTI I hadn’t kicked yet.  I sighed with relief and called home health the next day to explain that I needed a different nurse.

Fortunately they obliged, and my nurses got progressively better every week after, teaching me more about my condition, helping me get even better care, and recommending different treatments to help.  My third nurse especially advocated for me to receive more fluids, taught me more about how to dose my zofran and taped my line in a way that would help my kids be unable to yank on it.  I am still incredibly grateful to her and the following nurses that cared for me in such a compassionate and understanding way.

And not a single one after suggested I cure my disease with crackers.